This author’s pen has been scribbling furiously, and there is a book well under way. Herewith a short excerpt from the first draft addressing a critical aspect of the New Covenant. Enjoy! 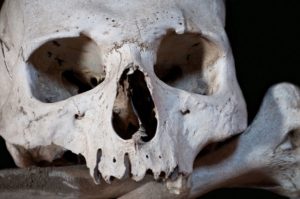 Dead works are not always bad things in any obvious way. What they are is those things done in self-reliance. The rebel’s defiant disobedience is therefore most obviously a dead work. But so are the best efforts of the self-righteous. It’s as simple as this – whatever is not of faith is sin. In other words, do it in your own wisdom or your own strength, and it’s a dead work. It’s sin. No matter how many pats of the back you get for doing a remarkable job, if it was not in faith, it was a dead work and it was sin. What that means is that a great deal of prayer, fasting and church attendance are dead works, as is every tithe given in fear, and every act of mercy done for men to see.

Good works are the antithesis of dead works. They are works done depending on God. That’s the defining factor. Whatever does not come from faith is sin. Remember the little old lady who put the two copper coins in the offering plate, and Jesus said that she had given more than everyone else? There she was, doing her good work surrounded by folk whose righteousness didn’t impress Jesus at all much. 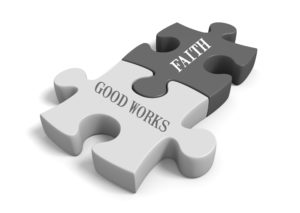 This is such a great example of the way in which the Gospel rearranges our paradigms. We tend to think that the opposite of a good work is a bad one. But deep down inside we all know that there is much more at stake in life than just good and bad behaviour. We’ve all dealt with self-righteous church goers whose attitudes disturb us deeply, even though their behaviour consistently appears impeccable. And we’ve also all met that no-good low-life whose behaviour is typically appalling, but whose heart attitudes have at times stopped us in our tracks as they’ve challenged us to the core of our beings. These anomalies are evidence that we intuitively know that the Lord does not define sin as superficially as it’s convenient to think. His is not just a framework of right and wrong, because He fully understands that good and evil cannot be defined by norms, standards, rules, regulations, patterns and principles, but that it involves the heart. Reduce matters to law and the result is a superficial righteousness, but one which falls far short of the perfections of the Lord in their profound simplicity, depth, richness and beauty.

God’s definition of sin in far more penetrating than transgression. The many words used to describe sin in the Bible bear witness to this. Included are brokenness, distortion, mediocrity, rebellion, insincerity, estrangement, misdirection and indebtedness, to moot just a few. These are not always easily quantified, but they are substantial enough to implode relationships, destroy lives, and even start wars. These are weighty issues, but they are in way complicated, for all sin has its essence in unbelief. Walk, work, say and do in God-reliance, and you’ll please Him. Faith pleases Him. Walk, work, say and do in self-reliance, and you’ll be nothing but a doer of dead works. Pastor, pastry chef, poet or policeman, this remains true.

In fact, nothing could be simpler. Even a little child can understand. Everything we do is either a good work or a dead work. Get the Gospel clear and it all hangs together without quandary or contradiction. There were two trees in the garden. Adam and Eve could have chosen to feast off the tree of life. To have done so would have been to trust God, pleasing Him in faith. Instead, they chose to feed off the tree of the knowledge of good and evil, trusting themselves, and in so doing rendered themselves arrogant unbelieving sinners who were the doers of dead works. There were also two Adams. Stark are they in contrast. First Adam, who did what was right in his own eyes, and Last Adam, who did what was right in His Father’s eyes. We too live either by faith or by sight, just as they did. Either by God’s words or by our own wisdom; relying on Him, or relying on ourselves.

Christians do dead works all the time of course. Some are in rebellious licentiousness, others in religious self-righteousness, but lawless or legalistic, they are dead works all the same. Other folk, not yet Christians, but moving towards faith as the Lord draws them, find themselves doing good works before they fully understand what these are. It could be they show up in a church meeting, drop some money in the offering plate, forgive an enemy, or sign up to serve in a soup kitchen. What is done is from the heart, and although their theology might still be a catastrophe, and their good works unable to save them, they are responding to God as best they’re able. Of these it can be said that they are not far from the kingdom, as was the scribe of old who Jesus commended for answering wisely. That goes to show that “getting it” can be a valuable step on the way to “got it” when it comes to the righteousness that is by faith alone.

The Good News then is that we Christians, made good by God in the moment we believed, have been re-created for good works. Dead works are an option, but good works are our inheritance. We fit our mission and our mission fits us, and our salvation comes to us fully equipped with ready-fitted good works that have been meticulously prepared just for us. This is good news indeed.

“If you preach too much about God’s unconditional love, it will lead people to disobey God and live self-indulgent lives.”

The love of Christ, not fear of punishment, motivates Christians.