The Gospel (by Ross Penniall)

The Gospel (by Ross Penniall)

The Gospel is more than just scandalous. It’s an offense to almost every culture, and will continue to be so for many centuries to come. But say what you must, it is incredibly good news to the people who have come to the end of themselves.

John wrote what is arguably the most famous verse in the Bible: John 3:16. It is so because it captures the heart of the Author, and His love letter, in one easy-to-understand sentence. It doesn’t need a professor to interpret it or a scholar to to unpack its truth. It’s simple: God loved. Jesus came. Men believe. Eternal life is given. John expresses the ease with which one is rescued from eternal condemnation: Believe in God’s one and only Son.

But that should cause one to stop and ask: What does it mean to believe in Jesus? What exactly are we to believe about Jesus that will grant the gift of eternal life to the one who believes?

Allow me to answer these all-important questions for you …

Many don’t like the idea, But God is all-knowing, all-powerful and all-present. He gives and sustains life,  and without Him nothing would exist. He is righteous and holy, perfect in every way. He exists outside of time. He sees all, and knows everything about everyone. Like it or not, He is Lord of all, including us.

We are unholy. We are unable to save ourselves, even though many don’t even believe there is an actual afterlife. We are rebels to the core. We are lost in our sins. We are worshipers of ourselves and live to please ourselves. We are unable to please Him or know Him. We don’t desire Him on any level. We are lost. Our destination is damnation. And truth is, that’s a just sentence, and we are in desperate need of a savior.

Side note: A good doctor doesn’t just give a sick man medicine. A good doctor whips out the x-rays. He displays pictures of the disease. He doesn’t hold back. He calls a spade a spade and gives the sick man a blunt, open and honest diagnosis of how bad it really is, to the point that the sick man is virtually begging for the remedy. One of the reasons why men don’t desire God’s remedy (Jesus) is because they aren’t aware of how sick they really are.

Jesus is God’s remedy for a sick and dying world. He came to seek and save the lost. Jesus paid the penalty for every lost man’s sin, and this for all time. He died for me and He died for you! He took the full brunt of God’s wrath at sin upon Himself. He reconciled God to the world. On the cross, He who knew no sin became sin, so that through Him many would become righteousness. He is the only way to God. He is the only remedy for a lost and dying world.

God is holy. I am unholy. I need saving. Jesus made it possible for me to be saved. That’s the message. The invitation is simple: BELIEVE! Church attendance is not a prerequisite. Neither is obeying the commandments or praying every day. “Quit smoking!” “Stop using foul language!” “Stop watching Internet porn!” “All good advice, but not the Good News. Jesus is the Good News. He lived the life we couldn’t live. He died the death we all deserved to die. He then gives us a salvation we could never earn. Grace is given to those who don’t deserve it. That’s you and me, my friend! And so, man’s response is so simple: just believe. Unwrap the gift and say thanks. 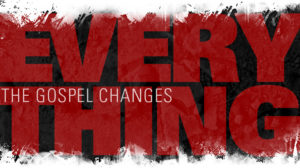 I will never stop enjoying these truths. In fact, we’ve only scratched the surface in understanding how glorious the Gospel really is.

A guest post for SMGN by Ross Penniall – lover of Jesus, lover of life, and lover of SoMuchGoodNews.